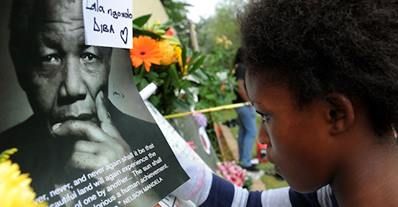 Interesting Facts You Did Not Know About Madiba (MUST READ)

Written by zerophoid on 10th Dec 2013. Posted in Interesting things about Africa.

1. He lived up to his name: Mandela’s birth name was Rolihlahla. In his Xhosa tribe, the name means pulling the branch of a tree or troublemaker.

2. He had a cameo in a Spike Lee film: He had a big part in Spike Lee’s 1992 biopic “Malcolm X.” At the very end of the movie, he plays a teacher reciting Malcolm X’s famous speech to a room full of Soweto school kids. But the pacifist Mandela wouldn’t say “by any means necessary.” So Lee cut back to footage of Malcolm X to close out the film.

3. There’s a woodpecker named after him: From Cape Town to California, streets named after Mandela abound. But he’s also been the subject of some rather unusual tributes. Last year, scientists named a prehistoric woodpecker after him: Australopicus nelsonmandelai. In 1973, the physics institute at Leeds University named a nuclear particle the ‘Mandela particle.’

4. He married a first lady: Before tying the knot with Mandela on his 80th birthday, Graca Machel was married to Mozambique President Samora Machel. Her marriage to Mandela after her husband’s death means she has been the first lady of two nations.

5. He was a master of disguise: When Mandela was eluding authorities during his fight against apartheid, he disguised himself in various ways, including as a chauffeur. The press nicknamed him “the Black Pimpernel” because of his police evasion tactics. “I became a creature of the night. I would keep to my hideout during the day, and would emerge to do my work when it became dark,” he says in his biography, “Long Walk to Freedom.”

7. He drew his inspiration from a poem: While he was in prison, Mandela would read William Ernest Henley’s “Invictus” to fellow prisoners. The poem, about never giving up, resonated with Mandela for its lines “I am the master of my fate. I am the captain of my soul.” You may know it from the movie by the same name starring Morgan Freeman as Mandela.