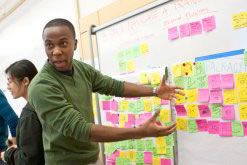 Planet named after a South African

Written by zerophoid on 27th Nov 2013. Posted in Interesting things about Africa.

A young man from the Eastern Cape in South Africa can now boast about having a whole planet named after him. Siyabulela Xuza has received an honour of having a celestial body named after him by the MIT Lincoln Laboratory. The planet named 23182 Siyaxuza circles in the main asteroid belt near Jupiter and takes 4.01 years to complete a single orbit. It was discovered in July 2000.

You wonder why Siya? At a young age Siya was already doing experiments. “I developed a fascination for chemicals when I was 12 years old. I mixed them in my mother’s kitchen and caused minor explosions to her utter dismay,” he says. From those experimental days he went on to build a rocket propelled by Siya’s own invention, a cheaper, safer type of rocket fuel, which became the subject of a project titled African Space: Fuelling Africa’s quest to space. It won a gold medal in the 2006 Eskom National Science Expo as well as a trip to the Nobel Prize ceremony in Sweden, where he presented his work to the Swedish king and queen.”

Matriculating in 2007 with a string of As, Siya went to study at Harvard’s School of Engineering and Applied Sciences, where he became one of just 1 948 students accepted out of about 28 000 who applied.