Written by zerophoid on 25th Sep 2013. Posted in Interesting places in Africa. 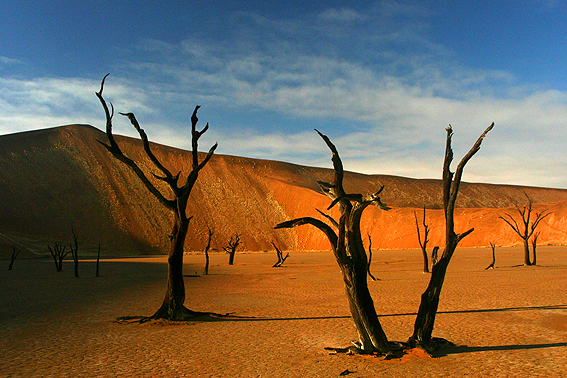 2 kilometres away from Sossusvlei is a clay pan called Deadvlei. A notable feature of Deadvlei is that it used to be an oasis with several acacia trees; afterwards, the river that watered the oasis changed its course. The pan is thus made niticeable by blackened, dead acacia trees that are about 9 centuries old, in vivid contrast to the shiny white of the salty floor of the pan and the intense orange of the dunes. This creates a particularly fascinating and surrealistic landscape, that appears in uncountable pictures and that has been used as a setting for photoshoots, films and videos. See more pictures in our gallery.